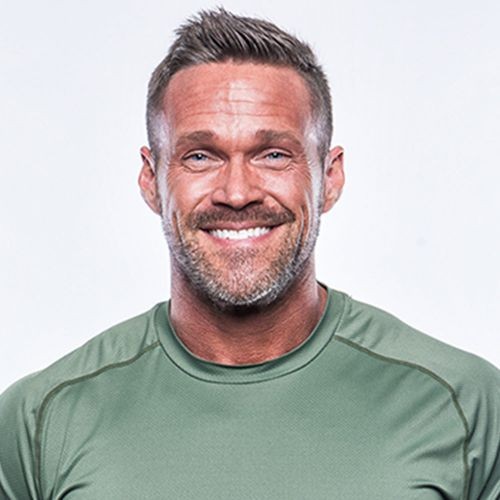 Those suffering from obesity often look up to Chris Powell and his instructions to lose weight. After all, when it comes to extreme weight loss, Chris Powell is the right guy. Chris is a proven personal trainer who has helped thousands of people cut off huge body fat and have a toned body.

Many know Chris Powell as a fitness guru. However, he is a multitalented individual. He has been in the media for a long time sharing weight-loss methods and diet plans. Powell is a successful author who includes every detail on living a healthy lifestyle in his books, which have sold thousands of copies.

This fitness trainer, model, and show host comes from Arizona, U.S. He was born on March 2, 1978, and raised in Mesa, Arizona.

Explore more information regarding his net worth and sexual orientation.

Chris Powell as a Personal Trainer

Chris Powell is a qualified personal trainer with relevant credentials affiliated with The Certified Strength and Conditioning Specialist (CSCS). Powell has a college degree in Exercise Science from Arizona State University. He focused mainly on the ins and outs of human anatomies, such as biomechanics, mobility, and physiology.

Though Chris Powell is a prominent personal trainer, he had to go through plenty of hardship to succeed in his career. Chris Powell was a victim of being underweight. Powell was so thin that he could not put on mass no matter how much he ate, let alone bulk up.

Thanks to his parents, Chris took weight training programs and finally started to see changes. After several months of training, Chris began to look much more lean and muscular.

Chris was successful in improving his body, that he began helping others achieve the same results. Initially, he started small by coaching local clients. One of his famous clients is David Smith, whom Chris helped to lose 400 pounds in 2008.

After being in the talks for providing effective results, Chris started to appear in fitness-related TV shows such as Good Morning America, The Dr. Oz Show, and Good Morning Arizona. His popularity began ever since.

Chris and his former clients co-founded a weight-loss program together, which also became a success.

Gradually, Chris built his influence within the fitness community. Soon, he became a fitness sensation across the U.S.

This dedicated trainer is always doing everything he can to help others. Hence, Chris also wrote guide books on nutrition and training.

The famous personal trainer Chris Powell tied the knot with his only wife in 2010. He was married to none other than the co-host of Extreme Weight Loss, Heidi Powell. Heidi is a fitness expert, just like Chris. Moreover, she is a trainer on YouTube who has over 113K subscribers.

The two came closer to each other thanks to their common interests.

Chris and Heidi had an incredible marriage run. When they were together, Heidi and Chris gave birth to two children, one son, and a daughter. They are William Cash Powell, nine years old, and Ruby Lane Powell, seven years old.

Other than this, Heidi had two extra children from her previous marriage to Derek. Despite being an ex-husband, Derek had a good relationship with Chris and Heidi. They were very close to each other as well.

Although it seems that everything was going well in Chris’s marriage, it was quite the contrary. A decade after their marriage, Chris and Heidi announced their separation through their Instagram with both party’s consent. Though they announced their split in May 2020, Heidi confirmed through her website that their marriage had already ended in 2019. Hence, she was only living a shadow of her marriage.

Both Chris and Heidi hide their personal lives despite having thousands of fans. As a result, the exact reason for their divorce is still a mystery. Nonetheless, we know that the two were incompatible with each other. Despite being the best of friends, Powell and Heidi could not be the best couple.

Heidi mentioned that there was no romance in their relationship. Moreover, to save their marriage, Heidi decided to have a 30-day sex challenge with Chris. But that did not work out either.

Some fans speculate that Heidi divorced Chris due to Derek. However, she later confirmed that she is not in love with her ex. Neither did Derek do anything that would ruin their marriage.

Chris Powell is a successful American personal trainer, author, talk show host, and reality tv star. He is a multitalented individual whose diverse careers have brought him enormous wealth. Initially, Chris earned it by appearing in various talk shows as a guest host. But his breakthrough came when he ran his reality show, Extreme Weight Loss, on an extensive network like ABC.

Besides this, Chris Powell is also an author whose books get more than 500 ratings on Amazon. Hence, his best-selling books have also added significantly to his wealth.

Chris recently divorced his wife after ten years of marriage. Fans could not believe how someone would divorce such an aesthetic woman like Heidi. This led to the belief that the reason for their divorce in Chris’s sexuality. Fans speculated him to be gay.

However, the host of Extreme Weight Loss is not gay. He may like to spend time with other males and guy friends, but this does not conclude that Chris is gay.