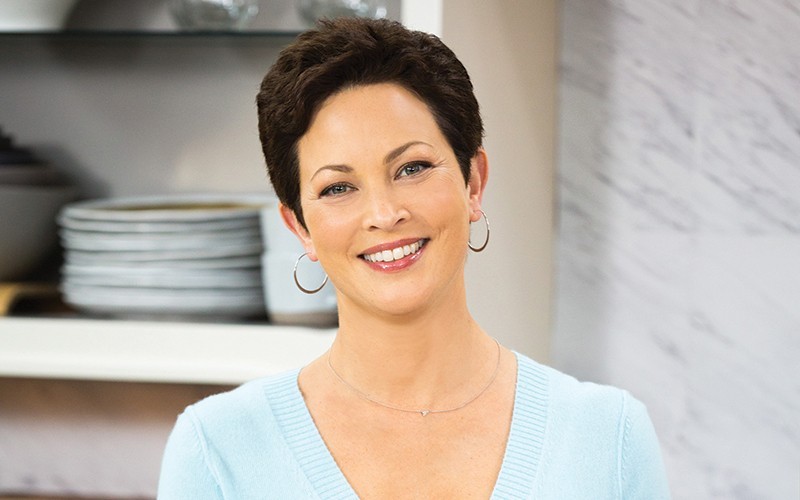 Ellie Krieger is an American dietitian and nutritionist. She came to the limelight when she started hosting the show Healthy Appetite with Ellie Krieger on Food Network. Apart from being a fitness freak and a tv host, Krieger is a New York Times best-selling author of seven cookbooks.

Uncover several key facts like her recipe tips and net worth. Also, she learned about her husband, Thom Schuchaskie.

Ellie Krieger Is a Nutritionist

Famous nutritionist Krieger wasn’t health-or-body-conscious until she began modeling in her teens. Working for such a prestigious agency as Wilhelmina, Ellie needed to be in the best shape of her life. She changed her diet and began working out religiously.

Subsequently, she continued her journey of knowledge and self-discovery at the Ivy League Columbia University, earning a Master’s degree in nutrition education.

She quickly figured out that merely having a degree wouldn’t help her cause. Hence, she earned certification to begin practicing as a registered dietitian and nutritionist.

After several years working in the field, she found widespread success with her cooking show, Ellie’s Real Good Food. She subsequently went on to host the Healthy Appetite with Ellie Krieger show on Food Network.

At one point, she was an adjunct professor at New York University, but currently, she runs her practice out of New York City. Additionally, she has been a columnist at several health-related magazines, including Food Network Magazine and Women’s Health Magazine.

So vaunted was her expertise that then-First Lady of the United States, Michelle Obama, called upon her to hold a nutrition workshop for children as part of the 2010 White House’s Healthy Kids Fair. She also serves on the advisory board of NYC’s Natural Gourmet Institute.

Furthermore, Krieger has authored several books, all relating to diet and lifestyle. She is in the midst of completing her fifth book.

As a nutritionist, Ellie Krieger’s opinions on diet are highly touted. On her website elliekrieger.com, Krieger has several patented recipes for a healthy diet.

In addition to her newest cookbook, the website contains hundreds of her individual recipes. Catering to both vegans and non-vegans, her recipes cover breakfast, lunch, dinner, and everything in between.

Net Worth and Salary

Ellie Krieger has an estimated net worth of $1.9 million. Her primary source of income is Ellie’s self-titled website, elliekrieger.com. The website provides a one-stop portal to all her cookbooks, individual recipes, cooking classes, blog, etc.

Her 2008 book, The Food You Crave: Luscious Recipes for a Healthy Life, made it into Amazon’s Customer Bestseller List. Additionally, several of Ellie’s books have also made it into the New York Times best-sellers’ list.

Despite being an eminent nutritionist, not much is known about Ellie Krieger’s personal life. She is, however, married and has a daughter.

Her husband, Thom Schuchaskie, is an outward-bound instructor and founder of Urban Kid Adventurers. His job entails teaching children to enjoy the outdoors by helping them become self-sufficient. He teaches the children to, for example, set up a tent, build a campfire, builds bows and arrows, ties knots, etc.

Ellie and Thom are parents to a daughter, Isabella, born in 2003. The family resides in New York City.