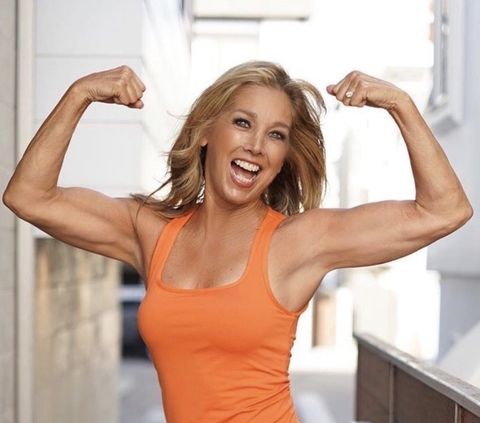 Denise Austin is a household name in the American fitness industry, with over 24 million fitness videos sold. In addition to this, the fitness celebrity also starred in one of the longest-running fitness shows aired on television. Let’s get to know more about Denise Austin and her net worth.

Moreover, she is also an author with 12 best-selling books under her name. Austin held a seat in the President’s Council on Physical Fitness and Sports under the administration of President George W. Bush. She is a native of San Pedro, Los Angeles, California, born on February 13, 1957.

Austin trained as a gymnast at 12 years old, and as a result, she gained acceptance at the University of Arizona through an athletic scholarship.

After a few years, she decided to transfer to California State University, where she completed her Bachelor’s Degree in Physical Education with a minor in Exercise Physiology. After that, she embarked on her career as a fitness expert.

Read till the end to know more about her husband and daughters.

Denise Austin is A Fitness Instructor

Denise Austin started her career by teaching aerobics classes in various locations across Los Angeles. After that, she earned a big break in her career in 1981. This was after she was chosen to be the co-host of fitness icon Jack LaLane in The Jack LaLanne Show.

As a result, they built a beautiful friendship until Lalane passed away in 2011. Austin looks up to Jack Lalane as one of her mentors and inspirations. Subsequently, she received another big break in 1982, after getting a television show of her own on KABC.

That same year, Austin debuted her first exercise videos, namely Rock Hard Abs and Rock Aerobics. She was also a part of the Today Show on NBC as its fitness expert from 1984 to 1988. Throughout her career, she has created more than 100 exercise videos that sold millions of copies. Her videos’ high sales volumes earned her a spot on the Video Hall of Fame in 2003, as a result.

At the same time, Austin also had two popular fitness shows on television, which made her an even more considerable following. Getting Fit is her longest-running show which aired on ESPN for a decade.

It transferred to a new home at the Lifetime Television Network. And it was renamed as the show The Denise Austin’s Daily Workout. Fit & Lite is her second show. She appeared on these shows for 14 years. People still remember these two as the most popular fitness shows on television.

At this time, viewers can still watch reruns of her show on select television networks. In 2008, the American Heart Association and Women’s Day Magazine bestowed her the Red Dress Award. She earned it for her advocacy on good nutrition and heart health.

In 2012 she established Forever Fit, her line of exercise equipment which featured 33 products that were available exclusively at Rite Aid stores all over the nation.

As a whole, Denise Austin believes in getting fit the natural way. She believes that an average of 30 minutes of daily exercise is enough. It is not necessary to spend hours exercising every single day.

Furthermore, Austin does not recommend skipping meals or extreme dieting as part of her fitness plan. An individual needs a healthy balance of proper nutrition and exercise to get that fit and healthy body. Apart from this, good meal portioning is also a vital part of staying fit.

Most importantly, she warns against fad diets that are pretty popular nowadays. Also, getting fit and healthy has no shortcuts.

First and foremost, the key to getting that fit body is a proper balance of exercise and the right diet. Her regular workout programs include a combination of cross-training, aerobics, pilates, and yoga.

The 64-year-old fitness industry pioneer Denise Austin has a net worth estimated at $12 million as of 2021. Without a doubt, she is one of the wealthiest celebrities in the fitness industry.

Denise Austin amassed her fortune through her popular television shows in the past, her books, videos, and product endorsements. In addition to this, Denise Austin also earns a considerable income from her various social media platforms. Clearly, her years of hard work have paid off.

Denise married Jeff Austin in the ’80s. Jeff used to be a tennis player and sports agent. They first met in 1981, when Denise was still teaching aerobics classes at a tennis club in Torrance, California.

At that time, Jeff was with his brother Tracy Austin who just won his second US Open. And the rest, as they say, is history. Finally, the couple married at the Holy Trinity Church in Palos Verdes on April 30, 1983.

Jeff and Denise have two daughters, namely Kelly and Katie, born in 1990 and 1993. One of her daughters decided to follow in her footsteps, which is not surprising, growing up with a celebrity mom.

Katie is now a fitness trainer like her famous mom. She has a YouTube channel where she posts her fitness videos. Katie Austin created a workout program called Get Fit with Katie.

Denise’s other daughter Kelly has just finished her degree at the University of Southern California and has not decided yet on which career path to take.