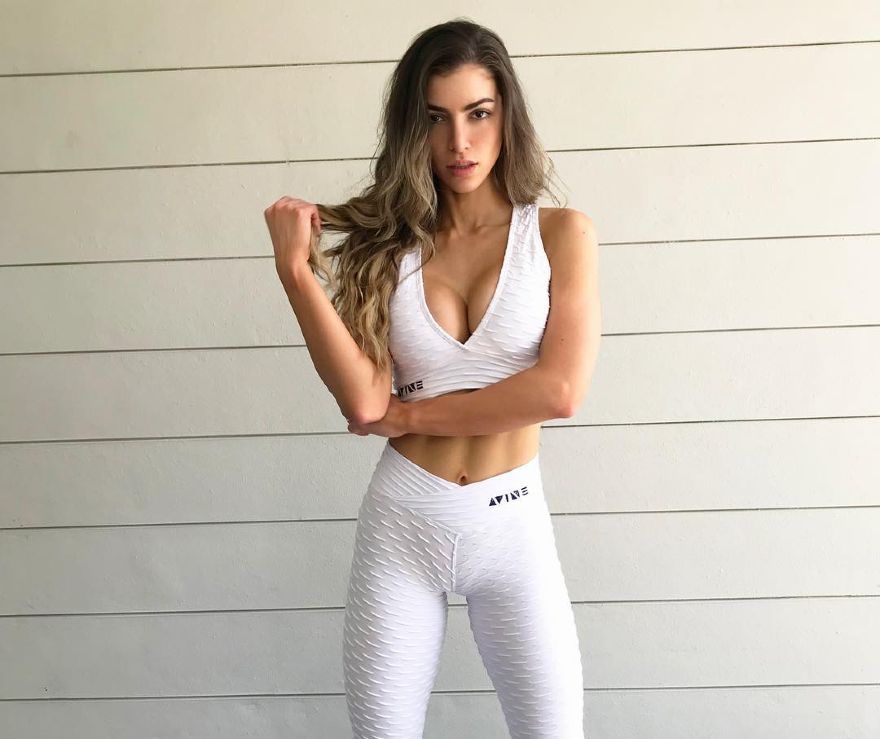 Anllela Sagra is a fitness enthusiast and trainer who got famous for creating a very effective fitness program. She is a bodybuilder. Her muscular physique goes to show that muscles can look good on women. Muscles do not have to make women look like hulking men. The fitness celebrity managed to exude a very feminine look even with all her muscles.

Anllela Sagra As A Fitness Model/Trainer

Anllela studied fashion design in college while she modeled on the side. She started working out to get more jobs as a model. Her goal at that time was to tone her body and achieve a sexier figure.

However, Anllela got addicted to lifting. This was after making the gym almost like her second home. After all the lifting that she was doing, she gained a lot of muscles. The people around her were concerned that she had become too muscular to become a fashion model.

Muscles and modeling do not mix. Modeling agencies want models that are toned but not muscular. At that point, Anllela was so psyched about her fitness and workout routine.

She decided to make a change in her career path and shifted to fitness competitions. With her mindset on her new career path, Anllela trained intensely for one year. In 2013, she joined her first fitness competition, and she finished in 3rd place. After that first completion, her fitness career took off.

Soon after, 1up supplements approached her and offered a sponsorship. She is glad that she made the correct change in her career path from modeling to fitness.

Anllela has an estimated net worth of $2 million as of 2021. She has accumulated her earnings mostly from her social media platforms with millions of followers.

Her Youtube videos have gathered millions of views, and that rakes in more income for her. She is estimated to earn an annual income of $20,000. Anllela also earns from her various endorsements. And her most significant endorsement is 1up, a health supplement brand.

She also launched a fitness application. She also gets modeling jobs for fitness magazines from time to time. Her sexy, semi-naked photos posted on her Instagram account have gained her even more followers. Anllela also has her website, where she provides subscriptions for workout programs.

An annual fitness subscription from Anllela’s website costs around $139. She also earns more revenue to add to her net worth on her website by selling activewear and other fitness merchandise.

In 2018, the sexy social media influencer stopped posting photos on her Instagram. This was very unusual for her since she uploads her photos almost every day since she first started on Instagram. Fans could not believe that she would disappear from social media for no reason.

Well, Anllela was very much alive and just took a short and much-needed rest from social media. Today, fitness celebrity is back on social media full time. She constantly uploads photos of herself working out or just being her usual sexy self.

Anllela is currently dating Tomas Echavarria. The couple met because of their shared interest in fitness, and they clicked instantly. They have been dating since 2015. Tomas is a bodybuilder and a fitness trainer like Anllela. He constantly appears in the fitness videos of Anllela.

They are one of the most idolized couples in the fitness world. It is rumored that the couple is already engaged. But Tomas and Anllela have yet to confirm this.

Anllela Sagra was born on October 6, 1993. She is a native of Colombia. Today, she is 27 years old and is already a very successful celebrity and entrepreneur. She started working hard at an early age, and now she is enjoying the fruits of her sacrifices and hard work.

Her success is truly inspiring for all her young fans. Anllela started as a young, skinny model, and she has gone a long way. Her pretty face and fantastic figure have gained her more popularity through the years.

Anllela is now a household name in the fitness world. The choices she made as a young, aspiring model have genuinely paid off.

Anllela stands at 5 feet and 9 inches and weighs 59 kilos. She has a naturally slim figure, but all those years of hard work at the gym have given her a figure envied by many.

Her measurements are 35-24-34. Now that is a stunning figure. Anllela often posts photos of herself wearing skimpy outfits or sometimes even semi-nude. And you cannot help but notice her amazing upper body. So for those who are wondering, her breast size is 32C.

The brown-haired and brown-eyed beauty lived most of her life in her home country Colombia. The names of Anllela’s parents have not been revealed to the public.

But it is publicly known that she has a sister named Laura Sagra. Just like her sister, Laura is also a fitness celebrity and model. Having outstanding figures indeed runs in their blood. Laura Sagra is also starting to make it in the fitness world.

Anllela was interested in fashion while growing up. She loved to dress up and design clothes. So after completing her high school education, Anllela enrolled at the University of Colombia and took a course on fashion design.

She took modeling jobs while studying to earn some extra money. Her mentors advised her to go to the gym because she was very skinny at that time. Her goal at that time was weight gain and body toning. However, she got addicted to weight lifting and the rest was history.